Welcome to Season 1, Episode 1 of Dock Lines and Exit Signs. Where do you start a story? At the beginning, of course. Although a lot of stuff led up to a big leap of faith, let’s just drop into the tale where it gets interesting and go from there.

When a series of life changes opened a door for me in 2019, I decided to dive through 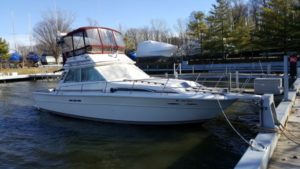 it head-first and see what it would be like to live on a boat on the Lake Michigan shoreline for the summer. I had wanted to try living on a boat for years, but responsibilities and circumstances made it impossible until that April.

There were a series of unknowns and issues that went along with my decision but none were insurmountable. The biggest issue was space – or a lack thereof. A boat the size of my Sea Ray is more than comfortable, but it’s amazing how much… stuff… you can accumulate after 20 years in a normal home.

Much like moving to a tiny house, moving onto a 40-foot boat can feel like an introduction to Minimalism. Although I did not adopt Maria Kondo’s wildly popular principles for eliminating clutter, I did use a huge yard sale as an “everything must go” vehicle and put the items I did want to keep in storage. 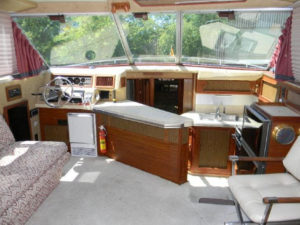 With little more than a suitcase full of summer clothing and some toiletries, I moved on to the boat while the Michigan weather was still far less than hospitable. Snow fell and accumulated on the boat twice in April forcing me to shove it off the bow and aft deck with a floor mop to prevent the slushy mess from freezing and adding too much weight to the vessel.

With both onboard heaters running, I was perfectly cozy and immediately felt right at home. Even with the unpredictable spring weather, I was perfectly happy to bundle up on the couch and watch Roku TV over the marina’s WIFI system.

I was gone a lot that spring, which might have made the transition easier since I missed a lot of the snotty weather. As a professional Captain, I am regularly hired to relocate boats around the Great Lakes, which might mean running a 50-footer from Milwaukee, WI, to Holland MI – nearly straight across the open waters of Lake Michigan, or shorter trips along the coast.

That May, I also ran a boat nearly 800 miles from Toledo Beach, OH to St. Joseph, MI. 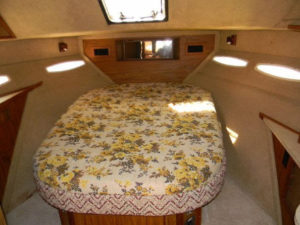 That trip took me nearly border to border around the mainland MI coastline. Although I spent 8 days at the wheel, the trip took a total of 8 days with temporary layovers due to weather and engine trouble.

I was also scheduled to speak at several classes and conferences and came and went from those. However, I was always thrilled to get back to the boat, no matter how inhospitable the weather. I loved being on the water and quickly adapted to life aboard my floating home.

Stay tuned for Episode 2 and the process of transforming my new, smaller living quarters into a comfortable apartment for one.